Cervical cancer is known to be a slow-growing tumor. Before cancer develops in the cervix, the cells of the cervix go through certain kind of transformation known as dysplasia, in which abnormal growth of cells occur in the cervical tissue. With the passage of time, the abnormal cells grow into malignant cells and start invading surrounding structures.

After diagnosis of cervical cancer has been made, tests are done to determine the extent of spread of cancer within the cervix or to other parts of the body. This is called staging of the tumor. Like any other malignant cancer, cervical cancer has great potential to spread from where it began to other parts of the body. It is significant to determine the stage in order to devise the treatment plan for the patient.

The following stages are used for cervical cancer: 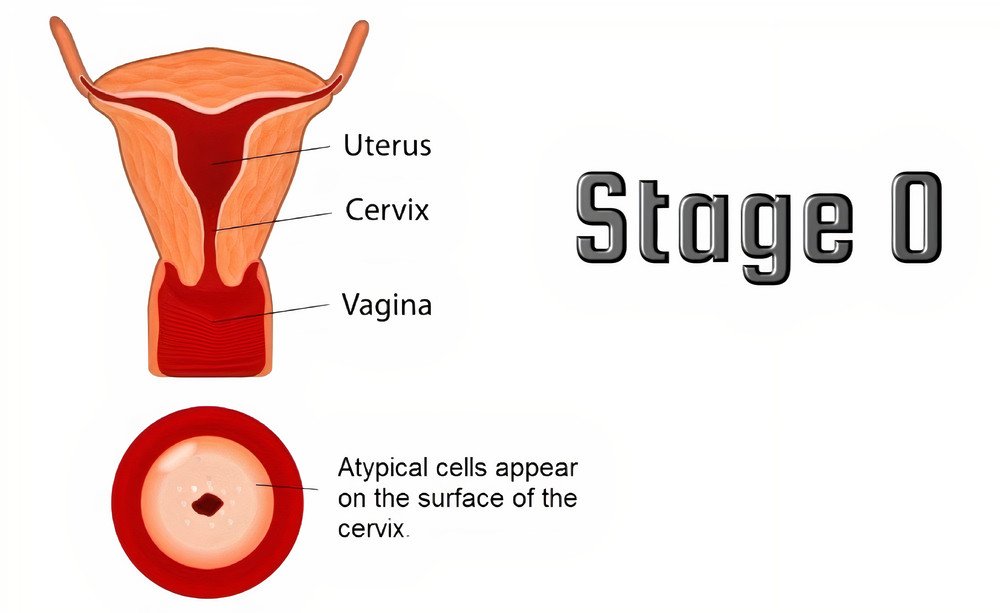 It is a pre-invasive stage of cervical cancer.

Premalignant conditions of cervical cancer and their grading:

Cervical intraepithelial neoplasia (CIN) is a premalignant condition in which atypical cells appear on the surface of the cervix. “Intraepithelial” denotes that the atypical cells are developing in the epithelial tissue of the cervix. The word “neoplasia” means abnormal growth of new cells. CIN is also referred as cervical dysplasia. CIN may be diagnosed through the Papanicolaou technique or colposcopic examination. But histopathological examination of a cervical biopsy is always considered as a gold standard in order to label the specimen as premalignant or malignant.

CIN 1 refers to the dysplastic changes restricted to the basal 1/3 of the cervical epithelium (mild dysplasia). In CIN 1, there is good maturation with negligible nuclear aberrations. Only few mitotic figures are seen. Atypical cells are limited to the deeper layers (lower third) of the epithelium. Research has shown that it is possible to observe cytopathic changes due to HPV in the full thickness of the epithelium even in mild stages of cervical dysplasia.

CIN 3 is also referred as a high-grade lesion but it is even more serious than CIN 2. It is truly a precancerous stage in which the dysplastic changes in the epithelium are seen in greater than 2/3 of the cervical epithelial lining up to and including full-thickness lesions. For this reason, it is called severe dysplasia or carcinoma in situ. In CIN 3, differentiation and stratification are not seen throughout the epithelium. Nuclear abnormalities are seen throughout the thickness of the epithelium. Numerous mitotic figures are seen. It is also called as Stage 0 of cervical cancer. Pap smear can detect these changes prior to development of invasive cervical cancer.

Squamous cells are the thin and flat epithelial cells of the surface of the cervix. Atypical cells can be further classified into two groups:

The squamous cells are mildly abnormal or atypical. These changes are related to HPV infection.

ASC-H has high risk of developing into cervical cancer. This condition refers to the presence of numerous atypical squamous cells on the surface of the cervix.

Glandular cells are known to produce mucus and are present in endocervical canal (opening in the center of the cervix). When these glandular appear abnormal, condition is referred as AGC.

Precancerous cells can also be found in the glandular tissue. They can develop into adenocarcinoma of cervix.

Low-grade refers to early variations in the size and shape of the epithelial cells. LSILs are referred as mild abnormalities most probably caused by HPV infection. CIN 1 is considered as LSIL.

High-grade squamous intraepithelial lesions consist of more noticeable variations in the size and shape of the epithelial cell linings. These atypical cells have potential to develop into precancerous cells. HSILs consist of extremely severe dysplastic changes and have a higher probability of progressing to invasive cervical cancer. CIN 2 and CIN 3 are commonly referred as HSILs.