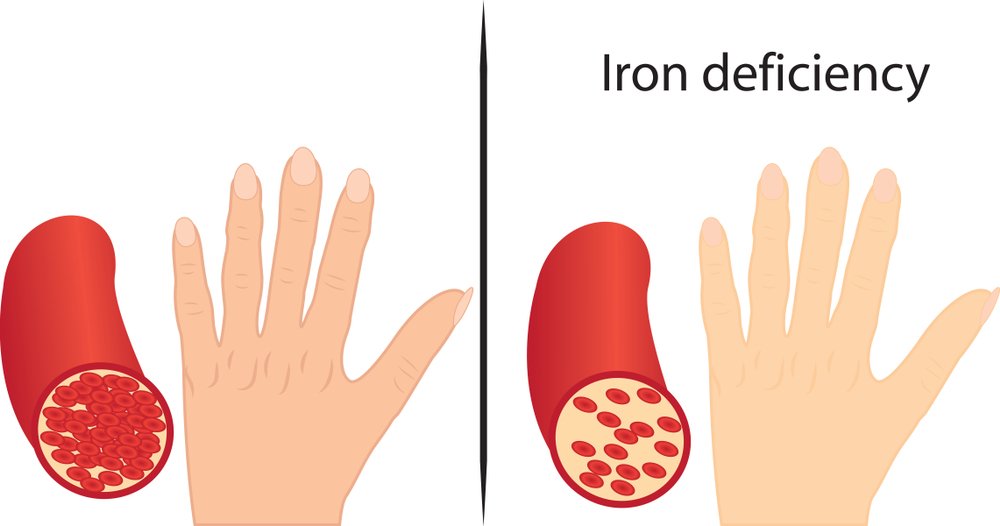 Iron plays a crucial role in the lives of all human beings and is required to ensure all tissues are properly oxygenated as well as to ensure the efficient metabolic function of most cells. Therefore, an iron deficiency can cause significant alterations to virtually all systems of the body.

Some causes of Iron Deficiency Anemia are inadequate dietary intake, excessive loss of iron due to alterations in the menstrual cycle or intestinal microhemorrhages, and chronic intestinal inflammation, which negatively affects intestinal absorption.

The clinical manifestations of Iron Deficiency Anemia are broad and include immunological alterations, impairment of cognitive function, and behavioral alterations. Taking into account the potential implications of this condition, it is vital that we learn as much as possible about the most common symptoms associated with it.

Some of the most characteristic symptoms of iron deficiency are fatigue, headache, and irritability, although they are not the only ones. In addition to fatigue, patients with Iron Deficiency Anemia may also experience the following symptoms:

Hemoglobin, that ever-important oxygen-laden protein, is what gives blood its characteristic red color. Patients suffering from Iron Deficiency Anemia have significantly lower levels of hemoglobin in their blood supply and as a consequence have blood that is lighter in color; as such, their skin acquires a characteristic pallor or pale appearance.

Experiencing an increased heart rate and rapid respiration is a universal consequence of performing strenuous physical activity. This phenomenon occurs because, during bouts of intense physical demand, the body’s oxygen requirement increases, and the heart and lungs go into overdrive in order to compensate. However, people suffering from Iron Deficiency Anemia are always in short supply of oxygenated blood and thus experience shortness of breath and heart palpitations even when at rest.

Iron deficiency causes atrophy of the epithelial tissues that line the tongue and inside of the oral cavity. A common consequence of this fact is the appearance of ulcers and other lesions on the inside of the mouth. The sides of the mouth also tend to crack and cause painful sores.

Anemic patients often feel cold, especially in their hands and feet, even when the environmental temperature does not justify it. This is due to poor circulation and lack of oxygenated blood in the extremities.

Pica is a psychological disorder which may be characterized by the appearance of an appetite for non-nutritive substances. Weirdly enough, patients suffering from Iron Deficiency Anemia frequently report having cravings to eat unusual and even inedible materials such as ash or dirt. Another common sign of Pica is the constant urge to eat ice.

More commonly known as Restless Leg Syndrome, this condition is characterized by experiencing unpleasant sensations in the legs and having an uncontrollable urge to move them. Not all sufferers of Willis-Ekbom disease present an iron deficiency, but it has been observed that having a mineral deficiency increases the likelihood of developing restless leg syndrome by a factor of ten.

Humans lose hundreds of hairs every day as a consequence of the normal follicular cycle. However, losing hair at an abnormal rate may be a warning sign that an iron deficiency is present. Patients suffering from Iron Deficiency Anemia often report experiencing unexpected hair loss.

Is a disorder of the nails, generally of the hand. Patients with koilonychia have nails which are abnormally thin and have a flat or even concave surface. Koilonychia can be a sign of various forms of Anemia, and especially so of Iron-deficiency anemia.

Cephaleas, more commonly known as headaches, can be a symptom of a multitude of ailments such as colds, dehydration, poor vision, etc. However, a constant headache can be caused by a severe iron deficiency.

Patients with Iron Deficiency Anemia grow significantly more prone to infection with time. The mineral iron is essential for the proper proliferation and maturation of immune cells. As such, the efficacy of a patient’s immune function depends in no small degree on their serum iron levels.