The knee joint is considered the most weight-bearing and complex joint in the human body. Unlike other joints, the knee joint is made of three separate bones which are the femur (thigh bone), the tibia (shinbone), and the patella (kneecap). The stability of the knee joint is established by the muscle tendons attached to its bony parts. For extra stability, the knee joint is surrounded by four ligaments. Healthy joints should be able to provide bodyweight support and smooth articulation to help in doing everyday activities. 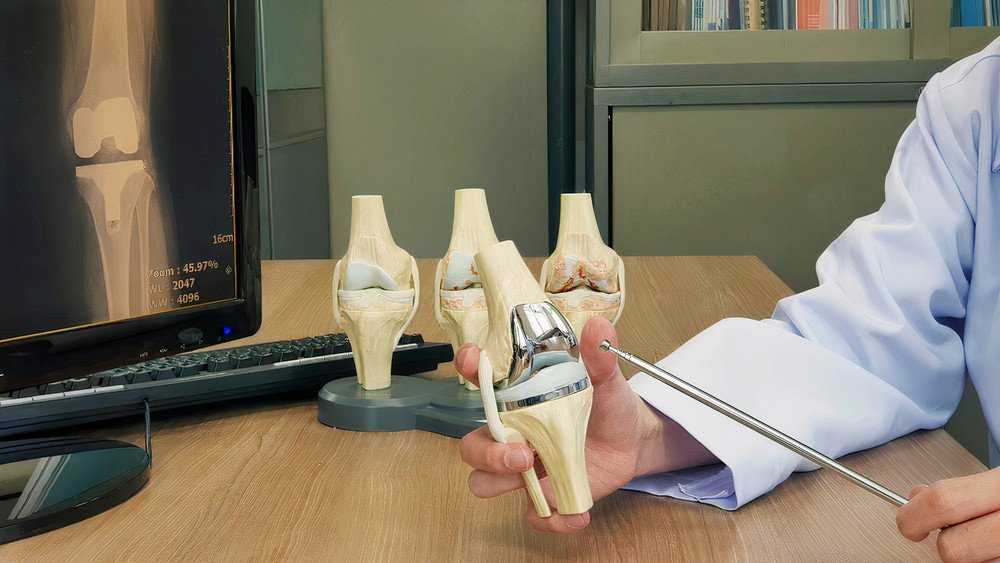 No doubt that the knee joint is vital and essential for movement, therefore it is more vulnerable to injury and wearing out. Knee pain could be unendurable and a burden to live with. In the 19th century, doctors figured out that the articulating surfaces of the severely diseased or injured knee joint could be replaced with artificial parts. In 1860, the first attempt to restore knee joint mobility surgically was by Dr. Fergussen who proposed resection arthroplasty. Resection arthroplasty was a primitive surgery in which the articulating surfaces of the bones were resurfaced.

In the mid-twentieth, an American orthopedic doctor called dr. Campbell had heard about Dr. smith- Petersen hip mold arthroplasty and how successful it was. In the 1940s, Dr. Campbell managed to perform the first mold hemiarthroplasty of the knee by fitting an artificial implant made of Vitallium (an alloy of cobalt, chromium, and molybdenum that was used at the time) in the femoral condyle. Surgical implantation of a metallic prosthesis in the bones forming the joint was the milestone of the evolutionary development of orthopedic surgery.

In the 1950s, a Swedish orthopedic surgeon called dr. Borje Walldius performed for the first time bicompartmental knee arthroplasty. The design of the hinged prosthesis was a breakthrough back then as it aligned the replaced femoral and tibial surfaces and allowed them to articulate as a simple hinge. Walldius’s surgery was a success and had satisfactory results. However, the implanted hinged prosthesis failed to provide complex movement of the healthy knee joint.

Continuous collaboration between orthopedic surgeons and engineers paid off in 1971 when a Canadian doctor called Frank Gunston designed and performed the first polycentric knee arthroplasty. Dr. Gunston, who had both engineering and medical degrees, was inspired by the THA (total hip arthroplasty) performed by Dr. John Charnley. He succeeded in creating the first knee prosthesis that mimics the biomechanics of a healthy knee joint. polycentric knee arthroplasty refined the concept of low friction arthropathy and restoring natural knee kinematics by implanting metal on polyethylene prosthesis. Dr. Gunstone’s contribution paved the way for further modifications as his concept is still an integral component of making the prosthetic implants used nowadays.

Dr. Michael freeman was a British orthopedic surgeon and one of the pioneers of modern knee arthroplasty. Dr. freeman collaborated with prof. Swanson (prof. of mechanical engineering) to create the freeman-Swanson bicompartmental knee prosthesis that provided better mechanical alignment and stability. This prosthetic model prioritized the functionality of the knee joint that was better fulfilled by removing the cruciate ligaments. Freeman’s concepts are considered the basic steps toward total knee replacement.

In the early 1970s, English and Indian orthopedic surgeons called respectively Dr. John Insall and Dr. Chitranjan Ranawat were working at the HSS (hospital for special surgery) and could develop the first total knee replacement prothesis (total condylar prosthesis). The revolutionary design of Dr. Insall model was favored by the medical community and replaced the existing hinge-type implants because of its better range of motion. Dr. Insall’s prosthetic model resurfaced the three bones making the knee joint (tibia, femur, and patella). The total condylar prosthesis has become the prototype for the current knee implants as it not only achieved the native knee biomechanics but also preserved the cruciate ligaments. For such contributions, Dr. insall is considered the father of total knee replacement surgery.

The past six decades since 1970 till now had witnessed a series of technological developments and adjustments to different aspects of the total knee replacement including the material of the prosthetic implants and the technique of the surgery. These progressive modifications have resulted in the current forms and type of knee replacement surgery. Moreover, the published studies and research papers had contributed to a higher success rate and better outcome of the surgery.